Most Louisville residents have encountered stinging insects at some point. These pests are common in our area so you won’t be able to avoid them. Although there may be others, the most common stinging insects include wasps, bees, hornets, and yellowjackets. These pests fit into the Hymenoptera order. Surprisingly, ants belong to this category as well. Most people would love to kill wasps and bees because they don’t want to get stung. However, you shouldn’t bother them unless they’re bothering you. They are beneficial pollinators so leaving them alone is recommended. If they’re not posing a threat to you or your loved ones, leave them alone. If they’re not damaging your property, don’t bother them.

Louisville is home to many stinging insects, including honeybees, carpenter bees, paper wasps, and others. You’ll likely encounter these pests so you’ll want to learn more about them and the dangers involved.

Have you found stinging insects on your property? If so, you need to identify them immediately. There are several species. You can determine what you’re dealing with by judging the insect’s appearance and the appearance of its nest.

Paper wasps are common in Louisville. Thankfully, paper wasps aren’t as aggressive as other members of the stinging insect group. However, they’ll sting people from time to time. Don’t get too close to the nest because you’ll likely get stung. When they decide to invade your property, you’re going to find paper wasp nests under your eaves and overhangs. They can also build nests on fences. There are several paper wasps species. You’ll find that the appearances are vastly different.

The European Paper Wasp features black and yellow stripes. They are frequently found in our area. Northern Paper Wasps have brown bodies with a few dark orange spots. In addition to this, they have white or yellow stripes on their abdomens.

Yellowjackets are incredibly aggressive so you should never try to fix this problem on your own. The nest gets larger in late summer and fall. When this happens, the stinging insects will become more aggressive. Yellowjackets have large nests that can house thousands of yellowjackets at once. A black or gray material covers the nest. Although some yellowjackets build underground nests, most are found around attics and porches. You may also find a nest in the dense bushes around your property.

Yellowjackets have yellow and black lines along their abdomens and heads. Their antennas are black.

Louisville residents will likely encounter bald-faced hornets. They’re similar to yellowjackets since they can build large nests that will support many insects. Furthermore, they become more aggressive in late summer and fall as the colony grows. One thing to note is that the nests will look different. If it looked like an upside-down teardrop, you’re dealing with a bald-faced hornet nest. Their nests are often built on trees and building sides.

Bald-faced hornets are white and black. They have larger abdomens, thoraxes, and heads.

When compared to other stinging insects in Louisville, honeybees are less aggressive. When bred properly, honeybees aren’t aggressive at all. As a result, a lot of people breed honeybees and use them to collect honey. They build elaborate nests out of max. In general, their nests are located on walls, rock crevices, and hollow trees. You will see a honeycomb pattern when looking at a honeybee nest. One thing that makes them unique is that these pests use the same nests for multiple years. They store honey to ensure they have plenty of food throughout the year.

Carpenter bees are not too aggressive. You can get close to their nest without getting stung. Their nests are unique since they drill holes in wood surfaces. Those holes will be 3/8ths of an inch. They are normally built on decks, wood siding, and fascia during Spring. The carpenter bee will throw out the wood before using the hole to care for young carpenter bees. Carpenter bees are large bees that look similar to bumblebees. There are several species.

The most common in our area has a black, shiny abdomen. Its thorax is fuzzy, black, and yellow. A male will have a small yellow spot on his face.

Wasps and yellowjackets are less aggressive than others. Unfortunately, some stinging pests will build underground nests. You likely won’t be able to avoid them. Finally, some of these pests can sting multiple times. If you’re allergic to stinging insects, it is best to stay away from any nests you encounter.

Most wonder why stinging insects decide to invade their property. Ultimately, there is no exact reason. However, most stinging insects invade because they’re looking for good places to build nests.

Getting Rid Of A Stinging Insect Infestation

We Strive To Provide Safe Treatments

Our company works hard to provide its clients with safe treatments. We don’t want to expose our clients to any risks. Our professional technicians are trained to take advantage of EPA-registered products to take care of stinging insect problems. We rely on these products because they’re safer than others. We make sure that our techniques do not expose our clients to any risks. Work with us so you can sleep comfortably at night knowing everything will be okay.

How much will you pay for our stinging insect removal services? Ultimately, we can’t give you a quote until we analyze the situation. We have to know more about the stinging insect, the size of your property, and the size of the nest. We’ll use this information to determine what to charge. We strive to provide cost-effective solutions. You’ll receive a bid price before the extermination begins.

How Soon Can You Arrive?

We’re eager to help you deal with your stinging insect problem. Contact our office and schedule an appointment now. In most cases, we will return your call within 24 hours.

What Can I Do To Protect My Louisville Property From A Repeat Stinging Bee Infiltration?

The stinging insect is a classification utilized in reference to all species with stingers. The stinger is an organ that injects harmful venom into the outermost layer of skin of human and animal victims. Stinging insects do not have a preference when it comes to stinging predatory mammals. Unfortunately, stinging insects like the carpenter bee, hornet, and paper wasp cannot differentiate between an innocent human or animal and a predator. If you or another family member or pet unknowingly enters the area where a nest is located, the insects’ aggression level begins to escalate. If the mistake is not corrected immediately, the tresspasser will become a pin cushion for stinging insects.

Removing structures and other items that attract stinging insects is key to protecting your property from repeat infiltration. Our Louisville extermination team can help you devise a carpenter bee prevention strategy that will offer 100 percent protection. 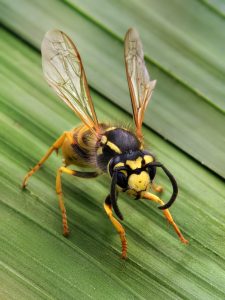