Carpenter ants come in various colors, including solid black, reddish/black, and brown. Besides the queen who is responsible for reproduction, the worker, soldier, drone, and winged and wingless swarmers make up the carpenter colony.

Each carpenter ant has mandibles that are utilized for erecting underground tunnels and nests, as well as foraging for food, feeding, and mating. The soldier carpenter ant is responsible for securitizing the entrance of the colony’s network of underground tunnels. Believe it or not, carpenter ants are extremely brave when it comes to food. They will attack other colonies to raid their food supplies, which is where the soldiers come into play.

How Do I Know If A Carpenter Ant Colony Is Invading My Home?

Carpenter ants spend the winter season hidden beneath the ground in their underground tunnels. This is where the insects remain until overwintering comes and goes. Overwintering is a process that allows various insect species, including the carpenter ant, to survive the harsh winter in a dormant state. Instead of needing to feed every six hours, the carpenter ant’s body feeds on nutrients from stored fats. Scientists believe overwintering plays a major role in protecting impacted insect species from extinction due to starvation or winter weather exposure.

What Are Carpenter Ants Doing Inside My Home?

Carpenter ants infiltrate commercial and residential establishments in search of a food supply. Unlike other overwintering pests, the carpenter ant does not invade homes in search of a warm, damp, safe, and discrete hiding place. Overwintering pests perfect spending the harsh winter season indoors, compared to outdoors, where they are exposed to the elements – icy rain and wind, single-digit temperatures, and snow.

Instead, carpenter ants spend the winter hidden in their underground tunnels, where they are spared from the harsh elements and predators. When carpenter ants are detected inside your home, you can guarantee one thing, they are after your non-perishables.

No, carpenter ants spread bacterium, resulting in infections like salmonella, E. coli, and Shigella. The insects drop their contaminated fecal droppings in the victim’s non-refrigerated food supply. When consumed by a member of the family, the onset of foodborne illness symptoms will appear. Stomach pain, vomiting, nausea, and diarrhea are all signs of foodborne illness.

There is only one way to protect yourself and your family from an ant-borne illness. A secure storage system, utilizing glass, stainless steel, or hard plastic free of harmful BPA is a necessity for victims of carpenter ant infestation.

How Can I Safely Eradicate The Carpenter Ants Infiltrating My Kitchen?

We highly recommend our eco-friendly carpenter ant management program. We combine high-quality pesticides free of dangerous chemicals and adhesive traps to fight against a carpenter ant infestation. Our pesticide line includes natural, organic, chemical-free, and chemical-based pesticides and insecticides, all of which are approved by the US Environmental Protection Agency (EPA).

No, conventional pesticides with low potency formulas are not powerful enough to fully eradicate a carpenter ant colony. Unfortunately, carpenter ant colonies can half hundreds or thousands of members, some on the exterior of your home and the remainder inside your home. To fully exterminate a colony, the pest control treatment must target all involved carpenter ants.

Homemade pesticides are generally not enough to successfully kill every member of the colony. If you are looking for a solid solution, our professional carpenter ant control is it.

When Can I Expect The Exterminator To Arrive At My Louisville Home On Appointment Day?

Our exterminators are prompt and professional. The exterminator assigned to your carpenter ant inspection will arrive at your home within a few minutes of the appointment deadline. Our pest control service processing takes between 12 and 24 hours to complete off-peak season. During peak season, which generally begins after the overwintering process comes to end, carpenter ant activity is at its highest. This is also when our pest control service is in the highest demand.

Will Carpenter Ant Pesticide Put My Health At Risk?

Chemical pesticides do pose some human health risks, which are mostly connected to long-time exposure. It is possible to eliminate these risks by eliminating any potential pesticide exposure. Our exterminators refuse to treat carpenter ant-infested establishments with chemical pesticides as long as they are occupied.

As mentioned previously, our pesticide product line is approved by the EPA.

What Can I Do To Prevent A Future Carpenter Ant Infestation?

Secure your home by sealing carpenter ant access points into your home. We also suggest following up with a new updated non-perishable food storage system. 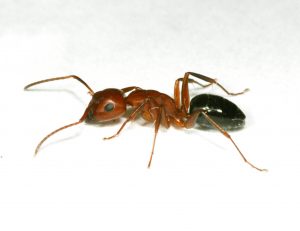